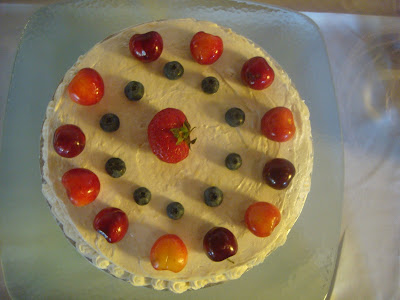 My trip to Halifax in early July was everything I hoped it would be. Fun. relaxed. Full of wedding-ness, family and cake-baking. It felt awesome to be back there. Awesome and a bit weird. It's my home, but my home is also in Charlottetown, and now sort of in Edmonton too. It makes for a strange feeling.

I ate some great food, home-cooked and out in restaurants. Of course there were places I wanted to visit that I didn't, but I have a couple of food posts in the works about the trip.

And the cakes! Oh yes, the cakes. Well. I made eight cakes, which was not as hard as it sounds. We wanted to have layer cakes so they could be filled, but the thought of baking 16 cakes instead of eight was, frankly, terrifying. So instead we baked eight, and cut each one in two so we could fill them. The final formula was orange cakes with lemon buttercream and lemon filling with sliced strawberries.

First I baked them, split them and froze them by wrapping first in plastic wrap and then in tin foil.

Then I made the buttercream and the filling. That meant a LOT of lemons. Thank God Claire has a juicer. This used to be my parents' and I love it. 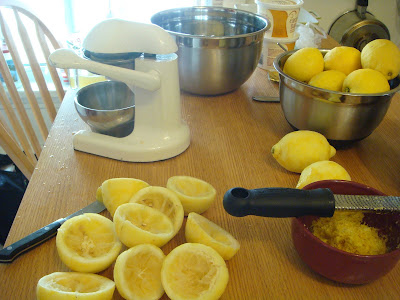 Then it was time to put the cakes together. After thawing, I spent the morning before the wedding filling, crumbing and frosting in stages. Crumbing is when you put a thin layer of icing on a cake to seal in the crumbs. Then you have to chill it before frosting.

These steps actually took less time than I thought they would - I think I really got into the zone. I made sure the decorating was simple: I just piped a single border on the bottom of each cake. I don't have a lot of experience piping, but I managed to make them all look pretty good. The frosting was super fluffy and fantastic to work with.

I definitely learned a few things through this whole process. If you are baking wedding cakes, or any large-scale baking project for a special occasion, this is my advice:

1. Make sure you have all the right equipment. I couldn't have done it without my mini palette knife to spread the frosting in straight lines, the right piping tip (in my case it was the star tip), and a turntable (or a revolving cake stand) to help ice the cakes easily.

2. Plan the transport of the cakes. We bought cardboard cake plates and cardboard cake boxes at the Bulk Barn in Halifax. The cakes were 9 inches and we bought 10-inch cake plates and 12-inch boxes. Emma, one of the other bridesmaids, helped me transport the cakes from Claire's apartment to the hall where the wedding was (thanks Emma!), and even with a little sliding around in the boxes, there was no mussing of the icing.

3. Buy extra of all ingredients. It took me about half an hour to calculate what I would need to octuple (is that a word?) these recipes, and I erred on the side of caution when I was at the grocery store (although of course I forgot a few things and had to make a few extra trips later). There's nothing more annoying than running out of lemons when you're still 2 tablespoons short of lemon juice.

4. Make sure your leavening agents are fresh. To be honest, I've never really thought much about this, but it really makes a difference. We made the first cake as a test with older baking powder and it did not rise that much. When we made the others with new baking powder they rose way more. 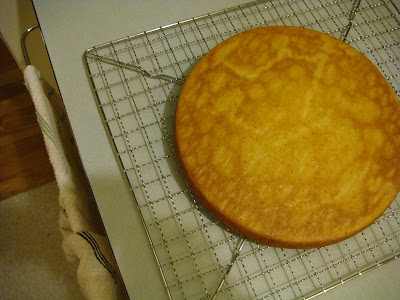 I would recommend all three of these recipes to anyone - and not just vegans! Not only are they all delicious, but practically they really hold up too. The cake recipe freezes well and was firm enough to cut easily without any crumbly bits. Despite the hot, muggy weather in Halifax, the buttercream (made with vegetable shortening and vegan margarine) showed zero signs of melting or separating even after the cakes sat on the display table at the reception for 12 hours (and no air conditioning in the room). Impressive, I say. The orange cake and buttercream are both from the fantastic book Vegan Cupcakes Take Over the World - a solid investment if you are a vegan or if you have any vegans in your life you like to bake for. The lemon creme filling is from another vegan dessert book called Sweet Utopia. 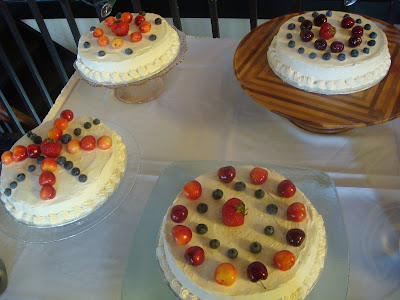 I was very lucky to be making these for an extremely grateful and non-demanding bride and groom. It was so great to be able to do this as a gift to both of them. Since they both love food, I knew the cakes had to taste amazing (hence the four test cakes before leaving Edmonton). But they weren't very picky about appearances, which I appreciated very much. We ended up decorating the cakes with an array of fresh summer fruit - red and Rainier cherries, strawberries, and blueberries. We left the fruit whole so it wouldn't bleed onto the white icing, which meant we had to remove some of it to make the cakes easier to cut, but it was okay. The cakes were all displayed together on one table on cake stands we had borrowed from friends and family. The final effect was very pretty and summery. 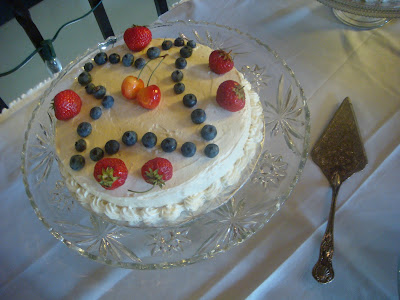 I got lots of compliments on the cake from people at the reception, which felt great. I thought it was good too. Although, to be honest, I probably won't be making another citrus-flavoured cake for a long time.

After a fantastic wedding and party, Claire and Alex went to Turkey on their honeymoon. Congratulations guys!! Maybe I can bake a cake for your anniversary party in the future ...
10 comments: 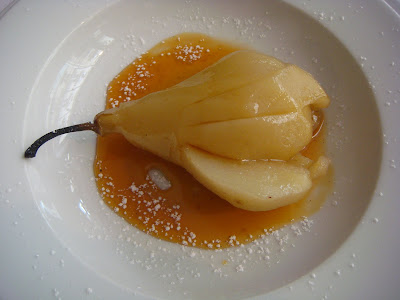 I can still taste the silkiness of this poached pear, the vanilla-scented honey syrup with a faint aftertaste of anise, the perfect warm ending to an amazing meal.

This is just a taste of a transcendent lunch we ate in Paris, and just a nibble of our entire European adventures. We are back in Edmonton after an amazing summer. Three and a half weeks in Europe, and so many stories and experiences. Plus my sister's wedding in Halifax and some fun times here at home too. I'm so lucky to have these memories - it truly was the summer of a lifetime.

I can't wait to share it with you all, but unfortunately the blogging software I use isn't working on my computer right now, so we'll all have to wait a little bit longer. (I'm using blogger to post this but I really can't stand it for long posts).

I promise lots of good things coming up - photos of Claire's wedding cakes, plus more food experiences in Halifax, excessive amounts of cheese and sausage products in Europe, some special meals, and also some big news. This blog is about to head in a new direction ... and I can't wait to tell you all about it.