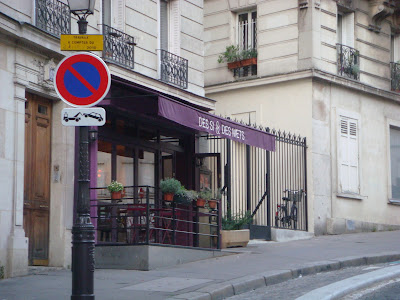 I was diagnosed with celiac disease about two weeks before leaving for Europe. I was pretty nervous about having to adopt a new diet while traveling in foreign countries, so I did a lot of online research about the foods I could hope to find in Austria and France. I knew we would have access to a kitchen during the entire trip, so we'd find a way to eat good food no matter what.

I was very happy to discover that David Lebovitz has a gluten-free guide to Paris on his website. David eats gluten, but he was kind enough to compile some information and advice for those of us who can't. Included in his list was the first, and only, gluten-free restaurant in Paris. I knew J and I would have to pay it a visit. 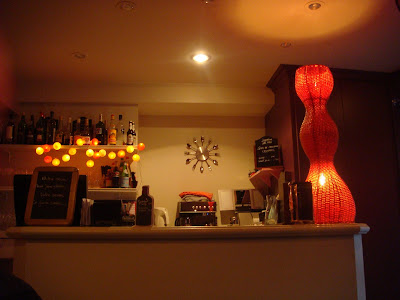 We went there on our first night in Paris, also my birthday. Pretty awesome. Although we had dined sumptuously at Osterreicher im MAK in Vienna the night before, who's going to complain about two birthday dinners? Not this girl.
Des si et des Mets is on a winding, hilly street in Montmartre, quite near the famous Café des Deux Moulins from Amélie (one of my favourite movies of all time). I had never been to Montmartre and J only once when he lived in Paris. We planned to go back to explore during the day, but never got around to it. I'm glad we got to see it by night.

The name of the restaurant translates as "Ifs and Dishes". It's a play on words because in French it sounds like "Ifs and Buts" (Mais, pronounced like mets, means but). It's a small, cozy place, with a modern and funky style: dark red walls, purple banquette, red beaded pillows. It was about half full when we arrived at 8:30 pm. 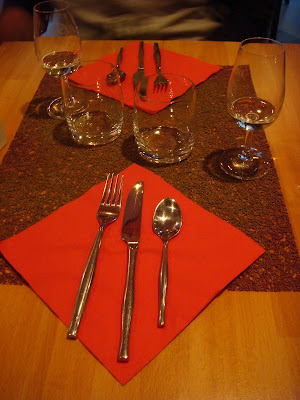 I was so excited to be eating in a place where I didn't have to ask any questions about what I could or could not have. There was even a bread basket! The bread was a little crumbly in texture, but tasty. Another plus: much of the menu was also lactose-free. J and I imagined how wonderful it would be to have an apartment nearby and come here once a week. 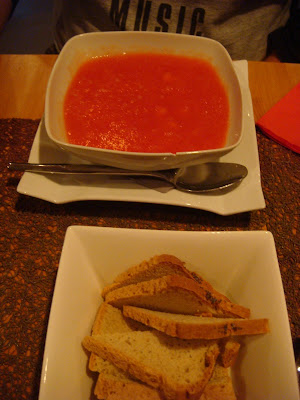 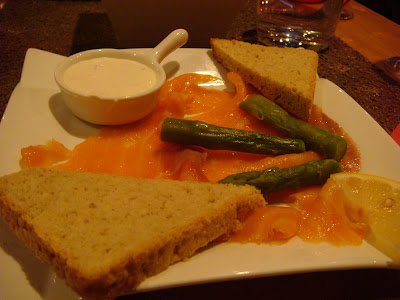 They had a prix fixe menu for 26€ (About $33 Canadian) so we went for that, plus a bottle of white wine. I started with the smoked salmon and J ordered the melon soup. The salmon was soft and creamy, and was served with spears of cold asparagus and a creamy dill sauce, with bread. I had never tasted anything like the soup before. It was bright pink, cold, sweet and refreshing.
I often find that appetizers are more impressive than main courses in restaurants. It's always disappointing when the best part of the meal is the first course, because your expectations are raised up high only to be immediately lowered. That's what happened here, although it wasn't extreme. My plat principal was a whole fish called dorade, with carrot-ginger puree. The flesh of the fish was delicious but it was very difficult to eat. Maybe it's a French thing to serve fish whole, but I had no idea how to efficiently remove the bones. The carrot puree was good but I found myself wanting something else on the plate.
J enjoyed his lamb chops with potatoes, but felt the same way. Maybe it was the way the meals were plated, but it seemed like something was lacking. 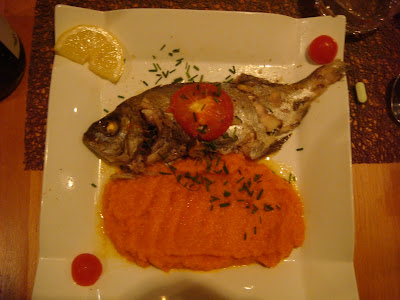 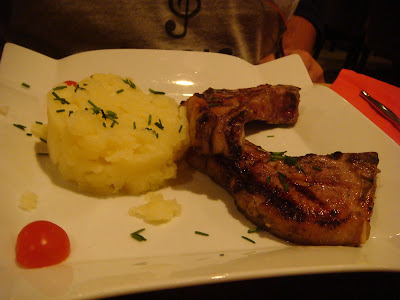 For dessert I chose the Crumble aux Pommes (the French don't have a word of their own for crumble) and J the Chèvre Chaud Sur Lit de Salades. The crumble was good, although I've gotta say I think I've made a better gluten-free crumble topping myself. J loved his salad, warm goat cheese on greens. With a sweet soup to start and a salad to finish, it was as though he'd reversed the appetizer and the dessert. 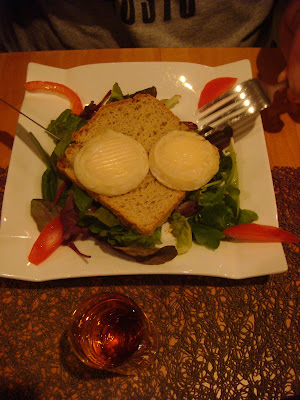 The whole evening at Des si et des mets was lovely. The service was friendly and quick, and the atmosphere was relaxed. Although the food wasn't perfect, it was tasty, and it was a great feeling knowing I could order anything from the menu. What freedom! 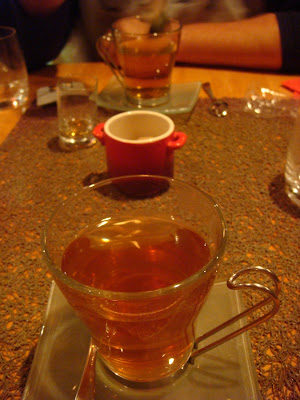