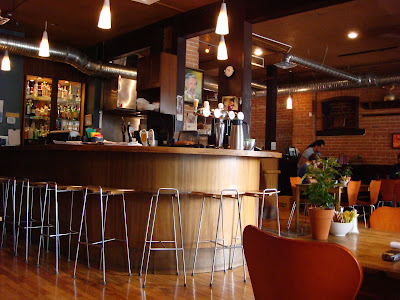 I first stepped into the Sugar Bowl restaurant on a warm day in late August.

I knew right away that this was a place I could enjoy. The walls were brick and hung with local art, the tables and chairs were made of wood, and the feel was homey, laid-back and funky all at once.

J and I settled into a table by the wall and opened our menus. With a name like the Sugar Bowl I expected an extensive coffee bar or at least a lot of desserts. Wrong on both counts. The specialty is wines and beers, with dozens of types of each available.

J chose the three-cheese Panini, and I ordered the veggie wrap stuffed with rice and beans with a side of hummus. The service was quick and soon our food was in front of us. The wrap was delicious, full or flavourful rice, beans and sautéed bell peppers, and the hummus was full of cilantro which tasted great. J said his sandwich was basically a “gourmet grilled cheese”, and it came nestled on a bed of greens with a balsamic reduction that he said was one of the best parts of the meal.

As usual, we decided to split a dessert. There are only a few choices on the menu and I hope to try them all eventually. We got the strawberry nutella Panini, which sounded awesome and didn’t disappoint. Two slices of sweet brioche stuffed with strawberries and nutella and grilled in a Panini machine. The result: messy, divine goodness.

I left the Sugar Bowl that day with the feeling that I would be back pretty soon. The food was good, but even more than that, it was the kind of place where I would love to just hang out, lingering over a beer or a cup of tea, reading the paper or writing. It’s like a cross between a cozy neighbourhood diner and a trendy bistro. 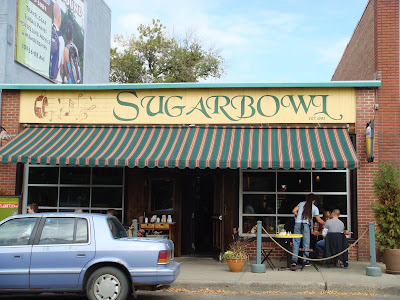 We were back two days later.

It was a chilly Saturday night and the Sugar Bowl was more crowded than it had been for lunch. This was an impromptu stop – we had been on our way to a choir concert but we were running late because the subway was shut down and we knew we would only make it to the concert quite late. So instead of just heading back to J’s brother’s place, we decided to head to our new favourite restaurant.

We sat at almost the same table as before and ordered beers. J got a Stella and I tried the Belgian cherry beer. I’m not really a beer drinker so I was hoping the fruit flavour might dilute the beer taste. And it did! In fact, the beer was made with fresh cherry juice and tasted like cherry popsicles, or as J put it, melted lollipops. It sounds unpleasant, I know, but after a few sips it kind of grew on me.

We also ordered the steamed soy bean appetizer, and later, the chocolate soufflé. I found that a disappointment. It wasn’t really a soufflé, it was like a molten cake, crispy on the outside and runny in the middle. I’m not a huge fan of those, especially when I’m expecting a lighter-than-air soufflé. The flavour was also nothing special. (J heartily disagrees.)

So when a few of J’s new friends suggested we meet up at the Sugar Bowl for supper a few nights later, I was all for it.

The dinner menu looked inviting – in fact I’d love to try all of the appetizers alone, especially an intriguing one called simply Nuts and Berries. It’s one of the strangest things I’ve seen on a menu in a while, but it sounds delicious. Is it like trail mix, I wonder, or more gourmet?

Then there are Greens, Bowls, Grills, Sautes and Entrees. I ordered the Autumn Harvest Burger, because the waitress said it was made with mushrooms (yum!) and I was in a burger mood. It was meaty and flavourful, and tasted like fall. It came served with homemade potatoes, always a favourite of mine, and spicy, homemade ketchup.

It’s now been over a week since we’ve been to the Sugar Bowl, and I think it’s time to go back.