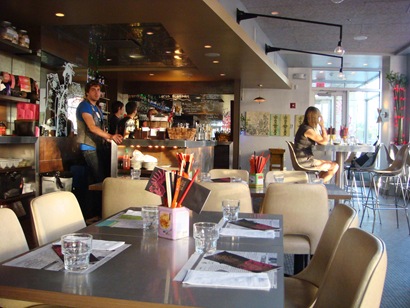 It’s been tough getting back into a regular blogging schedule. I forgot how busy things get when J is in school and we’re  just trying to get everything done around here. I’ve been doing a lot of great cooking and baking lately that I’d love to talk about, but first I need to follow up on a promise I made a few weeks ago. I want to tell about my beautiful birthday dinner we had in Boston.

How I love Chowhound.com, especially when I’m travelling in a new city. When we decided to go out for dinner, I wanted to eat food that I couldn’t eat all the time in Edmonton, and my first thought was sushi. (Yes, I know  there are lots of sushi places in Edmonton, but after living most of my life near the sea where there is ready access to very fresh sushi, I am a little bit spoiled.) I read a bunch of stuff about Japanese restaurants, but they were all either extremely high end and astronomically expensive, or little noodle shops with great food but not much atmosphere or place to sit down. We needed something in between. And we found it at Myers + Chang. 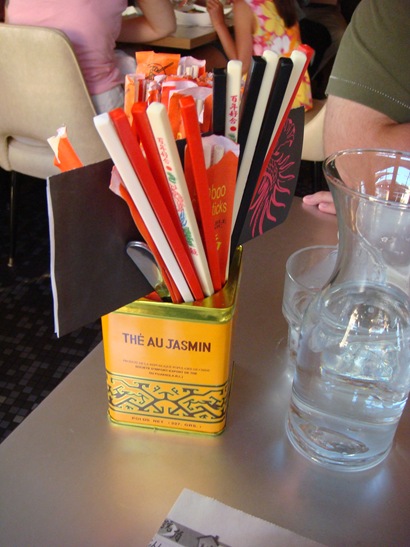 Myers + Chang calls itself Asian-fusion food, which is what attracted me to it on Chowhound. It’s a funky little bistro offering a mix of Chinese, Thai, Taiwanese and Vietnamese food. This type of food is some of our favourite, so we were excited to see what it would be like.

I always admire restaurants where the chefs aren’t afraid to try new things, and this was one of those places. I’ve read a few reviews lately of Asian-fusion restaurants here in Edmonton that serve the same old Asian dishes that you can eat anywhere, but at Myers + Chang there were some really innovative items: tea-smoked spare ribs, wok-roasted mussels, and asian-braised short rib tacos among them. Unfortunately I was on the last part of my cleanse and I still wasn’t eating red meat. Since we wanted to share all of our food so we could try as many different dishes as we could, we were a little bit limited, but there was still plenty to choose from.

Our server, like every server in the restaurant, was young and epitomized the word ‘hipster’. He was very nice and extremely knowledgeable about the menu, but he spoke so fast that it was difficult to keep up with him. As the birthday girl, J let me decide what to order, so I picked five dishes that I hoped would complement each other nicely. The waiter told us that there were no set courses and that everything came out of the kitchen as it was cooked.

We began with drinks. There were several intriguing cocktails, and I chose the sake cherry sangria. J had a lychee cocktail with prosecco. The sangria was fine, but was missing the chunks of wine-soaked fruit that I usually expect in it. I preferred J’s drink, which was refreshing and fruity. 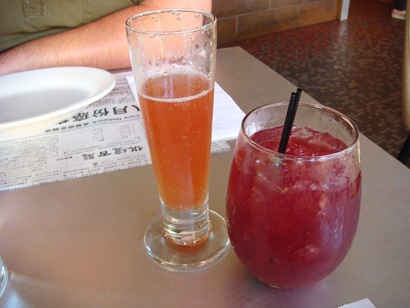 As we sipped we admired our surroundings. The restaurant is a small L-shaped space with no more than 20 tables. The decor is a mix of retro and modern, with red dragon designs on the windows and a wall of mirrors with drawings and writing in white marker. One side of the space is taken up with a long bar and an open kitchen. It felt funky and bright when we first got there, and started to get cozy as the sun set and it got dark. The first dish out was a roasted shiitake omelet with sambal on top. (As I learned that night, sambal is a spicy condiment made with chili peppers.) The omelet was okay, but I couldn’t really taste the shiitake. I think the eggs were also cooked a little too long for my taste – my favourite part was the crispy edges that had spent time in the oil. 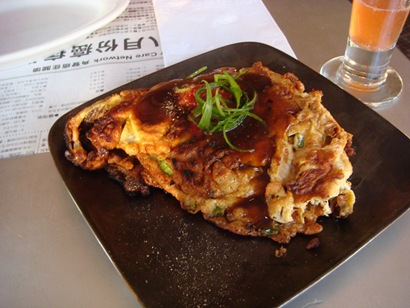 But it was about to get better. Out came the wok-roasted mussels with lemongrass and grilled garlic toast. I tasted one, and immediately declared them the best mussels I had ever eaten. And I have eaten many a mussel. They were soft, juicy and so incredibly flavourful. I couldn’t figure out all of the ingredients in the broth, but it was spicy, salty, a little bit sweet and totally addictive. 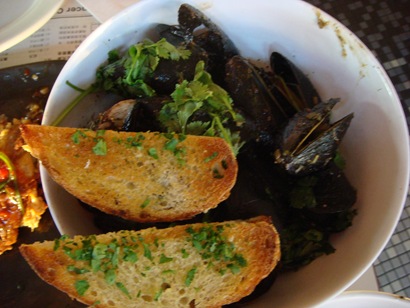 As we dipped the mussels in the broth and pulled them off their shells with our teeth, the spice and salt started to get overwhelming. The thai ginger chicken salad arrived at the perfect time. The cool vermicelli and earthy ginger were the perfect counterpart to the flavours going gangbusters in my mouth. 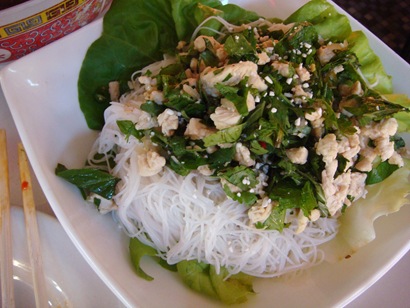 By this point, our tiny table was so full of food and dishes that in my usual clumsiness I ended up knocking our mussel shell bowl clattering to the floor. And I hadn’t even finished my first drink! A waitress quickly came over and cleaned it up, offering us a new shell bowl. After that I was extra careful with where my elbows were.

Our lemony shrimp dumplings arrived soon after.  They were good, but I regretted not ordering the shiitake and Chinese greens version. The lemon flavour in the shrimp was overpowering and tasted almost chemically. 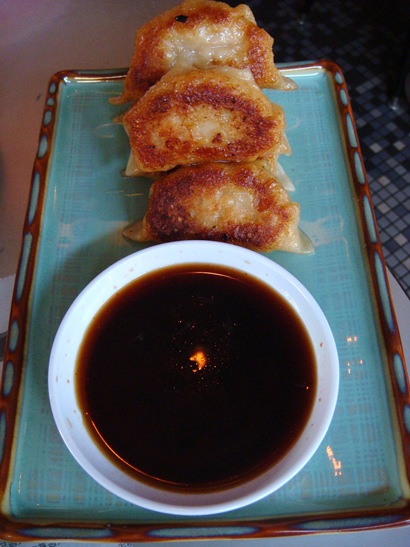 We were still busily eating from every plate on the table when our last dish arrived – the local corn and coconut soup, with a roasted corn and crab sambal on top. This soup was a miracle. I wish I knew how they made it. I suppose I could have asked but it didn’t even occur to me; I was too busy enjoying it. It was a velvety, frothy puree, which I assume was made with coconut milk. The taste was unbelievable. Sweet but not too sweet, with a kick from the sambal on top. It tasted like a cob of the freshest summer corn, complemented by smooth coconut. Even with the sambal, its milky sweetness was, again, the perfect antidote to the hot mussels, chewy dumplings and cool salad. 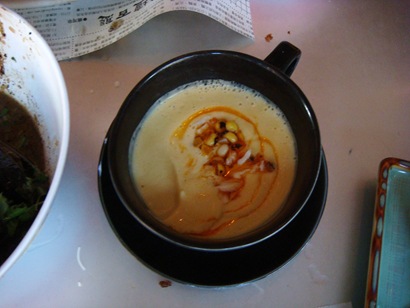 What I loved about our meal was how all of the flavours came together so wonderfully. The omelet was a bit of a dud, but when you’re ordering off a new menu you can’t hit a home run with every dish.

We didn’t have a lot of choice from the dessert menu because I still couldn’t eat chocolate, and  J realized this summer that he’s lactose intolerant. The only non-dairy, non-chocolate-cake option was the fresh orange granita with frozen vanilla bean parfait. The waiter kindly split it in two – J ate the granita and I ate the parfait (which tasted like a slice of dense ice cream). The parfait by itself was fine, but clearly the two were meant to be together. I stole a few bites of the granita with the parfait and it tasted like a delicious creamsicle.

We were lucky to find Myers + Chang. Now we just wish there was a place like it in Edmonton. But maybe there is, and we just have yet to find it.

Even though you weren't won over by the cherry sangria, I imagine it to be amazing (seeing as I can't drink still, the idea of wine and fruit is irresistible!).