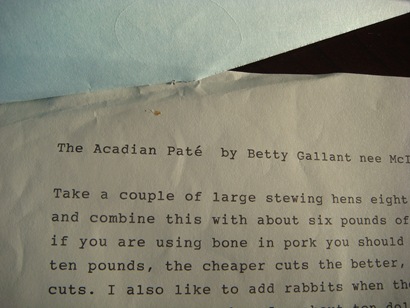 When I think of Christmas food in my family, the first thing that comes to mind is usually pâté. Pâté is Acadian meat pie, not to be confused with its lesser cousin, that Quebecois stuff, tourtiere (I actually like tourtiere but here I must play favourites). Pâté is made with chopped meat rather than ground, and usually has a biscuit crust instead of a regular pie crust. The spices can vary from recipe to recipe, but often include a mixture of coriander, summer savoury, marjoram and thyme. 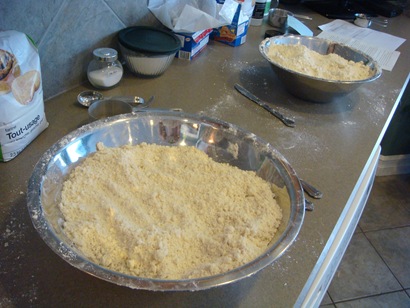 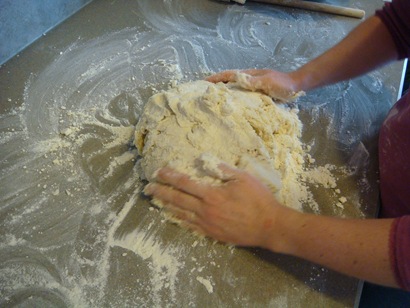 When my dad was growing up in rural PEI in the 1940s and 50s, pâté was a Christmas Eve tradition. His family always celebrated Christmas with a big Réveillon after getting home from midnight Mass, and that’s when they ate pâté. The favoured condiment was mustard pickles.

As I got to know J’s family, I was surprised to learn that they eat pâté year-round. Well, why not? It’s so delicious that it doesn’t really make sense to save it for once a year. They also eat it with molasses. This also surprised me at first, but I’ve since learned that they pour molasses on just about everything.

I had never made pâté myself until this Christmas. When I was growing up my Mom made it sometimes, or we got some from my aunts to serve Christmas Eve. Two of my older sisters made it for a while every year, and maybe they still do. But it was never something I learned. 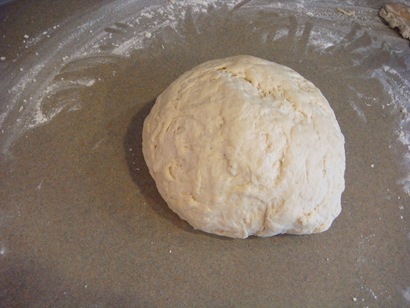 But this year, I got together with my cousin Natalie, who lives in St. Albert. Natalie’s father is my uncle Cyril, and he wrote out the Gallant family recipe, which I assume he originally got from his mother, my grandmother Regina (it may have been tweaked a bit by his wife Betty as well). In their family they make it every year, and Natalie and her three sisters sometimes get together to make it.

Pâté is best made in a group, because it is a lot of work. This year it was just the two of us, but our task for the day was made easier because Natalie had already cooked all of the meat, which is a huge step. All we had to do was make the dough, fill the pies, and bake them. 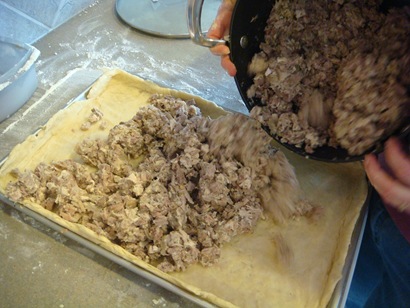 I’ve usually eaten pâté with chicken and pork, but the traditional recipe calls for wild rabbit or hare. J’s dad told us that when he was a kid, his remembers eating pâté filled with rabbit bones. Mmmm-mmmm.

Natalie showed me her dad’s typewritten recipe, which is more like a story than a recipe, and it’s probably how my dad would have written it too. But Natalie, in her organized, meticulous way, took that and created a table with all the ingredients and amounts. So great! 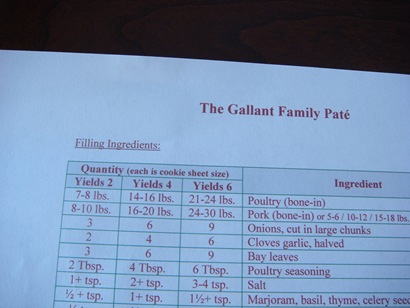 I felt like I was part of such a long tradition as we stood at the counter mixing our dough ingredients, adding the meat filling, and spreading the crust over top. I learned that the secret to a delicious crust is to use the stock from the meat as your liquid. Natalie, like her parents, always cooks her pies in big cookie sheets, rather than round pie plates, which is what I’ve always seen. I learned how to pat the dough on top of the meat filling and tuck it in all around to ensure no leaks. After baking, I came home with one huge rectangular pâté. I had to cut it into pieces so it would fit into our tiny apartment freezer. 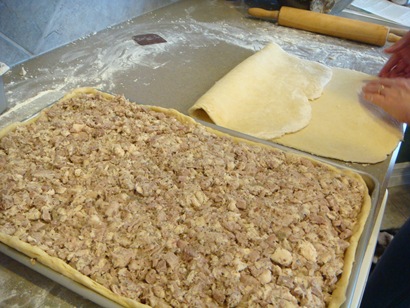 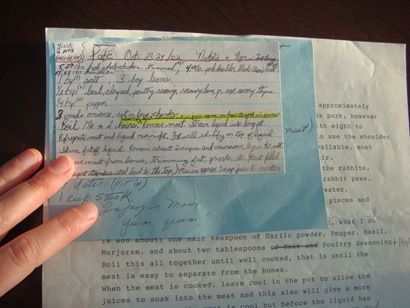 Last week when J’s parents were visiting, we took out one of the pieces for supper one night. The crust was tender, the meat perfectly spiced. This pâté recipe is different from the Arsenault family recipe, but I knew mine was good when both J’s parents loved it. 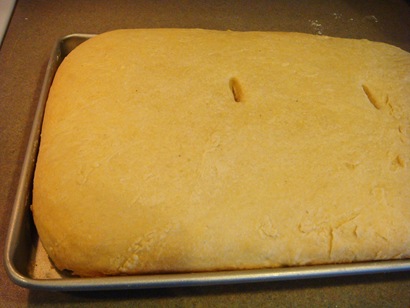 Now that my Mom is visiting, I just have to try to find some mustard pickles before Christmas Eve.

Bone-in?...yuck! I would hate the texture!

If only the recipe card was totally visible.

Sounds and looks like it would be a fantastic treat! I'll have to take a crack at something like this.

Please share your recipe? Even if just privately. It looks outrageously delicious.

It really is good, but the recipe makes a lot, so it's a big job. Good to share the work with someone else. Isabelle's paté was delicious, but we never did find mustard pickles; I discovered it's good with molasses!