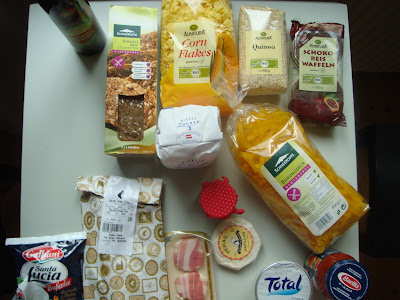 Shopping for food in a foreign country is so much fun. Especially when you're in a place where food is everywhere - in little stalls on the neighbourhood square, sold from street-corner stands, slurped up by people eating at open-air tables that line the streets. 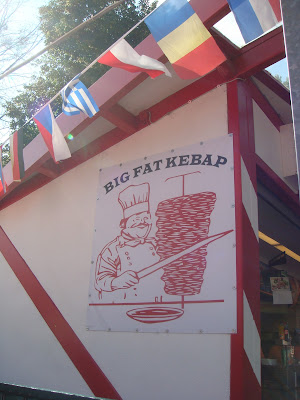 During our week in Vienna we fell into a luxurious routine. We'd sleep in, get up and make a large brunch-like meal, go out and explore the city, come back to our apartment and cook supper, drink cheap Austrian wine and go to bed. Repeat.

It was a pretty awesome way to spend a week in Vienna. 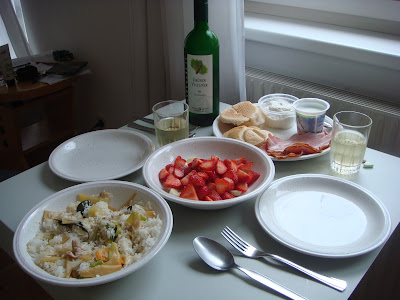 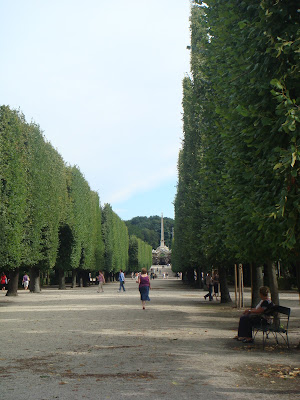 We saw some fantastic things in that city. The Belvedere art museum, housed in a baroque palace, with gorgeous gardens and the largest collection of Klimt in the world. Another Baroque Palace, Schloss Schonbrunn, with more beautiful gardens, a maze, and a zoo. The crazily over-the-top amusement park in the Prater park. The Leopold Museum in the new Museums Quartier, with a fantastic collection of modern art. And lots, lots more. 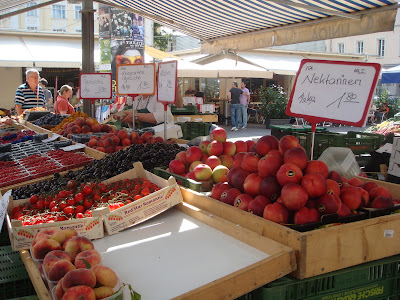 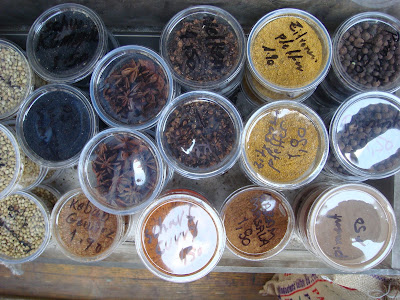 To keep us going on these excursions, we ate a lot of chocolate-covered rice cakes. Definitely one of the culinary discoveries of the trip, and available in many different varieties everywhere we went in Europe. I know they don't sound very exciting, but they are excellent. The rice cakes we ate in Europe were thin and crisp, with much more flavour than your average Quaker's variety, and coated with good dark chocolate they make a fantastic snack. We often went through a pack in a day while walking the Vienna streets. 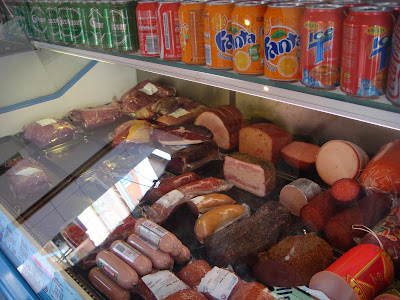 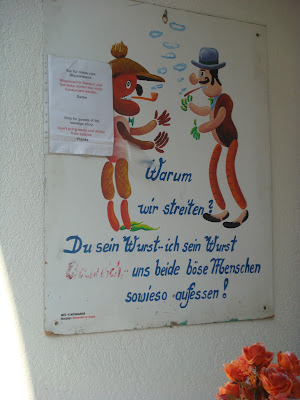 I also fell in love with the cured sausages we snacked on. We bought them at Spar, a grocery chain found across Europe. They were long and thin, spicy, fatty and chewy. They had just the right amount of fat to balance out the meat and spices that made your tongue burn a little, but not too much. 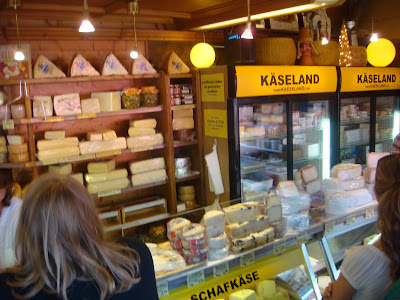 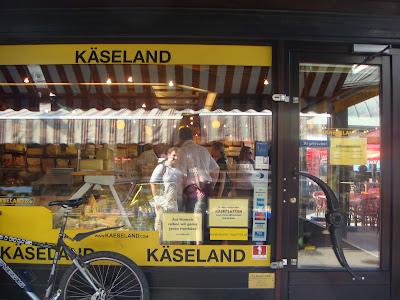 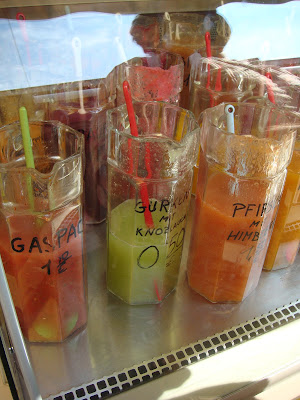 We spent one afternoon at one of Vienna's most famous food destinations, the Naschmarkt. It's a long, outdoor market filled with stalls, cafes and shops selling all kinds of foods. We stocked up on vegetables, drank some delicious fresh juice, visited a wonderful cheese shop, and even found a health-food store selling gluten-free baked goods! 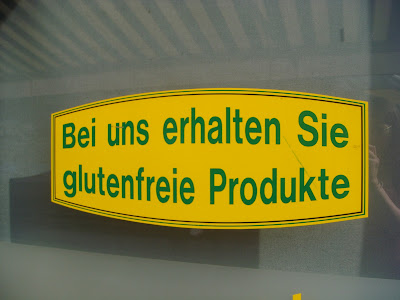 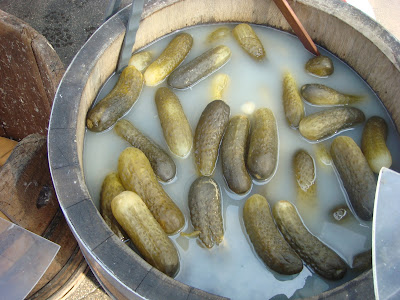 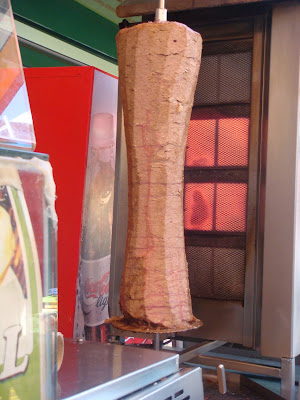 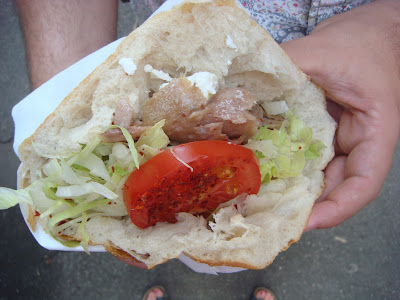 J picked up one of his all-time favourite Austrian meals - a kebap with fresh sheep's cheese. He said this one wasn't quite as good as the ones he ate all summer in Baden. 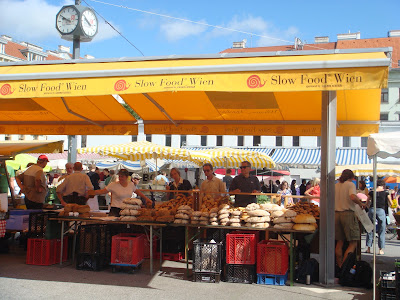 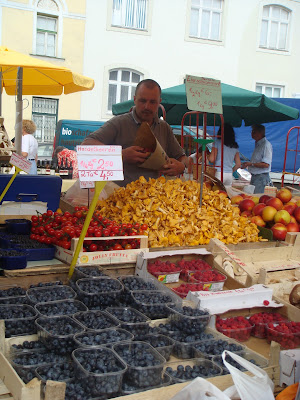 We also visited the Saturday farmers' market at the neighbourhood square right near our apartment, Karmelitermarkt. The rest of the week, the square is a place to pick up a few groceries and go for an evening drink and a bite to eat, with a handful of bars and cafes and stores selling vegetables, meat, cheese and bread. It's already quite lively, but on Saturday it was full to bursting with shoppers picking up the freshest vegetables and other products from farms around Vienna. The ubiquitous chanterelle mushrooms, available all over the city, were everywhere, and stalls were brimming with other fresh produce: peppers, lettuce, berries, potatoes, and carrots. There were succulent cheeses, crusty baguettes, oils and vinegars, and plenty more. 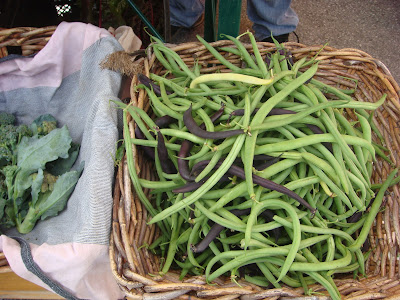 We stopped at one stand to buy green beans, lettuce and potatoes that all looked like they had just been plucked from the earth. When the woman behind the stall told us the price, we laughed with surprise. "Oh", she said, "We don't use any pesticides on our vegetables, so that's why they are a little but more expensive." We had to assure her we were shocked by how cheap they were, not how expensive. We told her that where we come from, organic vegetables cost way more. 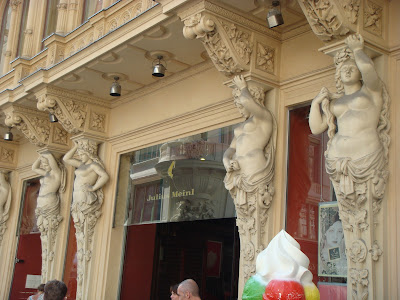 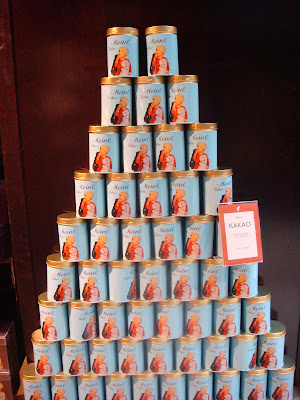 Our final memorable shopping experience in the city was of the more expensive variety. We visited the beautiful Meinl food store several times - there was so much to see and all of it so enticing. Meinl is actually an Austrian coffeehouse chain, but they've expanded their wares. The store includes a coffee bar and ice cream stand at the front, plus a wine bar and cafe down one level. The rest of the two floors are filled with a dizzying array of fresh and packaged gourmet foods. Towering displays of hot chocolate and apricot preserves, in-store bakery, deli and cheese counter, wine, liquor and beer, and yes, even a small gluten-free section. 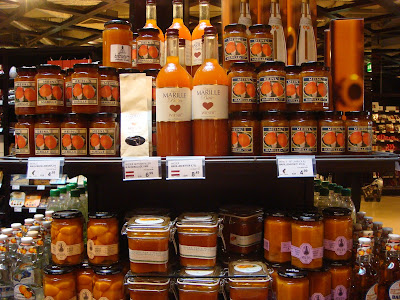 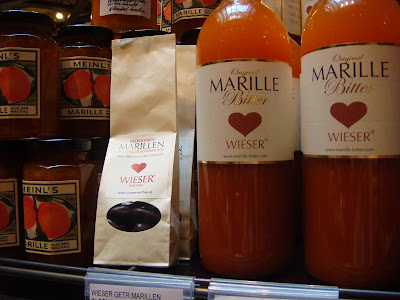 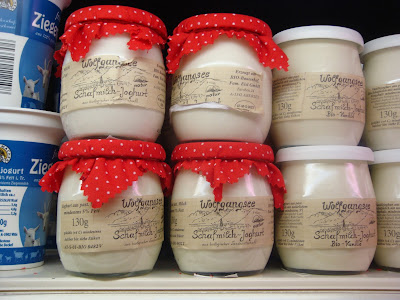 I adore the huge selection of yogurt you can find in Europe. J was extremely happy in Austria too, because sheep's milk products are everywhere - all kinds of cheese, yogurt, dessert puddings etc. And they're all packaged so cutely, you want to buy every one. 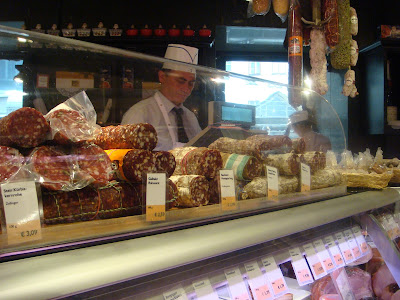 Cheese and meat were the definite culinary themes of our whole European trip. In Vienna, it was amazing sheep's cheese, both hard and soft, plus "chevre-au-lard" - literally, goat's cheese with lard. Soft discs of goat cheese wrapped in meaty bacon, fried up in a pan and spread onto (gf) bread for a gooey, salty, delicious snack. We also ate sausage after sausage, both cured and fresh, and bought a block of cured ham that we used to flavour almost every meal, whether it was based on quinoa, pasta or potatoes. 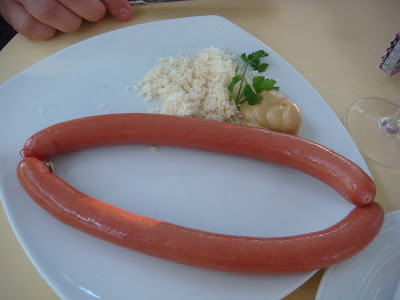 There's one last thing we ate in Vienna that I still find myself craving, even though when I explain it to people, it really doesn't sound that special. We stopped at a few cafes, including the famous Cafe Central, where Trotzky and Freud used to sip coffee. At places like this there aren't many gluten-free options on the menu, but one of them was simple sausages served with strong mustard and fresh horseradish. The sausages were nothing special, really - kind of like long, thin hot dogs - but combined with the strong bite of the mustard and horseradish they satisfied every time. 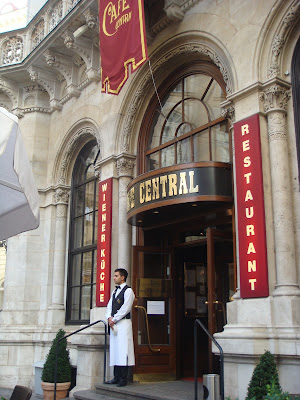 I still find myself dreaming about our idyllic week in Vienna - the apartment where we slept with the floor-to-ceiling windows open to the courtyard, woken by the strange calling of a mourning dove, crossing the Danube canal to explore the city, the excitement of being free to do whatever you want in a place you've never been. It was everything we could have hoped for. 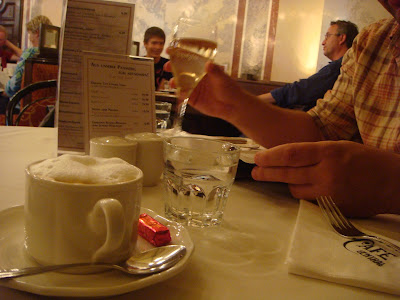 I loved my four days in Vienna, too... we spend an entire day at the NMarket... I can't spell it...and still recall the man with the dill pickles yelling at me for taking a photo... lucky you... you got a close up! What a spectacular market... it went on and on and on... and there were a fair amount of flies, there, too! We didn't get to enough museums - but the Hapsburg's Palace was wonderful. That's where I bought my Klimpt poster/print that I cherish. Can't wait to hear more.
:)
valerie

Mmmm...I love how you put it: the meat has the right amount of fat...because yes, some FAT is good for you and really makes more scrumptious eats! Like REAL butter. Did you see the film "Julie and Julia"?
Oooh, in our CSA, we got green and purple green beans, I was SO disappointed when I cooked them and the purple ones turned green.

Those sausages at the coffee shop, Frankfurter, are available from Freybe. My personal go to snack in the winter time.

Glorious kebap! The best I had was in Baden also, very small little place...so much so that we had to wait for our food outside and they could take someone else's order.

Valerie - that's funny about the dill pickle man! Yes, Vienna is incredible and I can't wait to go back.

H. Peter - Thanks for the kind words. Do you know where you can buy those sausages in Alberta?

Lauren - If I could have eaten a kebap, I would have...they looked amazing!

Hey Is, I missed a bunch of your posts... this one is fantastic, and makes me miss similar things in Rome. The green beans are sooo beautiful, and I love the story about the woman selling them! How were you able to make sure those long sausages didn't have any grain fillers in them? I love sausages too, one of the few meat items along with bacon and good ham that prevent me from being vegetarian.