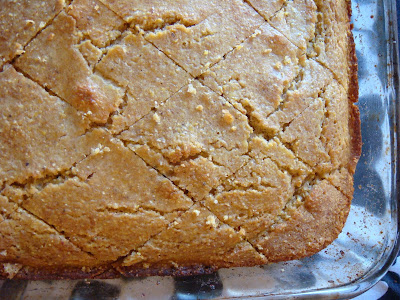 So I lied. I haven’t given you my cornbread recipe. And believe me, it’s worth giving.

But I can’t really take credit. It’s not my recipe. The one I make now is mostly attributed to the Moosewood Restaurant New Classics cookbook, with a little inspiration from Deborah Madison thrown in.

I started baking the Moosewood cornbread during my undergrad. I think it was because of a summer meal after my first year, when my friends Gavin and Phil came to visit me on P.E.I. They were at my house for supper and my sister Claire made vegetarian chilli and a huge platter of this cornbread. I fell in love with it. We ate outside in our backyard under the poplar trees. I remember my Dad telling Phil and Gavin stories about his younger days, when he drank lime ricky sandwiches.


(Lime Ricky is a kind of pop only made, to my knowledge, by the Seaman's bottling company on P.E.I. A Lime Ricky Sandwich, according to my Dad, was a shot of moonshine, a shot of lime ricky, and another shot of moonshine. I believe he drank these around the tender age of sixteen. By the time I was old enough to notice, he had long since switched to Captain Morgan on the rocks.) 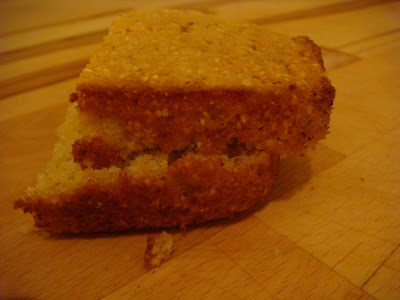 I photocopied the recipe and started baking the cornbread myself when I got back to university later that year. I’ve been making it ever since. It became a hit with my roommates, particularly Rachael who actually started calling me Cornbread, a nickname that lasted right up until graduation (and possibly persists to this day).

So you see, this cornbread recipe comes with a lot of history attached. Treat it with respect. Make often, and enjoy unadorned, with butter and jam, or with a slice of aged cheddar cheese.

I’ve often meant to try a different cornbread recipe, or at least add some corn kernels, grated cheese, and/or diced green chiles to my basic recipe, as I’ve seen in so many other places. But I still haven’t gotten around to it. I guess that means this one is pretty darn good. 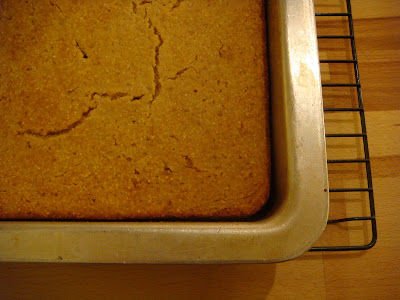 Using butter in the pan means it comes out golden-crisped and fragrant. A Deborah Madison trick!

2 to 4 tablespoons honey to taste

Preheat the oven to 425. Put the butter in an 8-inch square baking pan and put the pan in the oven while it’s heating. Meanwhile, stir the dry ingredients together and make a well in the centre of the bowl. In another bowl, whisk together the wet ingredients. As soon as the oven is hot, remove the pan and brush the butter around the edges. Pour any excess into the wet ingredients. Quickly mix the wet and dry ingredients together, then pour the batter into the pan and bake in the middle of the oven until golden brown on top and beginning to pull away from the edges, about 25 minutes.

I thought it was Lime Ricki.
Try sauteeing corn kernels and adding them to your batter, mmm.

I think it's actually Lime Rickey. I missed this when you wrote it and your story about Dad made me cry... I love how you have memories I don't even know. I never heard of a Lime Rickey sandwich! :-)

Yum -- I just tried this last night for supper, and it was delicious! I love the tip about melting the butter in the pan -- it really does give the edges a nice crunchiness.