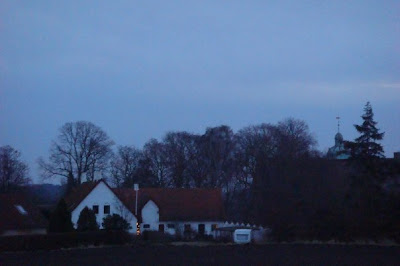 The closer it got to Christmas this year, the more I found myself missing . J and I were there for Christmas last year, while we were on our honeymoon. My mother’s sister Lucy moved to fifteen years ago, met a Dane named Eigil, and has been there ever since. They live on the of near the town of , in a pretty little village called Kölstrup, in an adorable little row house in an old building that used to be a dairy. It was originally the dairy of a castle that’s right nearby, which has been divided into apartments as well. We saw castles everywhere we went in . 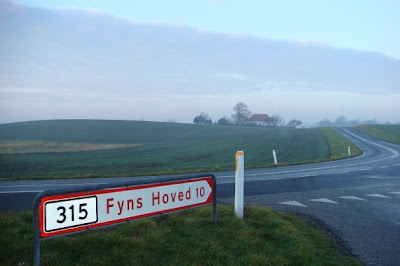 We stayed at Lucy and Eigil’s for ten days. We ate, explored the countryside, learned some Danish, ate some more, relaxed, made Christmas candy, ate it, visited friends, bought souvenirs, went to a movie, visited museums, and ate.

After Christmas we went to , where J has good friends, and stayed for ten days too. Don’t get me wrong, was wonderful and amazing and I would return at the drop of a hat, I would live there easily, but … was just so new and different and beautiful in a way that was both cozy and stark all at once. We drove around the winding roads that curved past cute little hedges and houses made of timber and peat that were hundreds of years old. The countryside was full of houses like this, and castles, and red roof-topped buildings. The towns were strung with Christmas lights and full of little bakeries and stores with tables of wares out on the street. It was only my third trip to so I was still awestruck with just how European everything was. 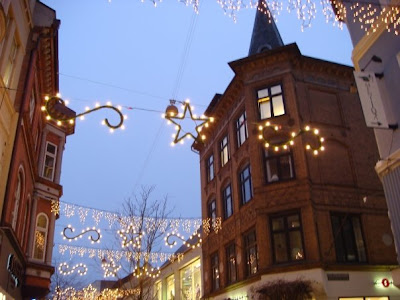 Of course (you knew it was coming), one of my favourite parts of the trip was the food.

The best meal of the day, in my opinion, was breakfast. We always had a variety of delicious choices:

Tea, juice, fizzy juice, hot chocolate (There’s something about having a variety of nice drinks around that makes things feel special) 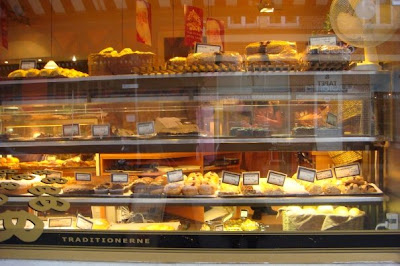 We also made pepparkakor, the traditional Swedish Christmas cookies, and marzipan candy. Marzipan is everywhere in . If you walk into any bakery, probably at least half of what’s in the case will have marzipan – almond paste – in it. I hadn’t eaten much of it before, and I like it, but I found it was used a little too liberally. Marzipan rolled in a ball with nougat and dipped in chocolate, however, is pretty damn good. Lucy also treated us to traditional heart-shaped soft gingerbread cookies covered in chocolate and sprinkles, and we discovered a great treat: little donuts that were tied in knots called kleine that were available in almost every bakery. 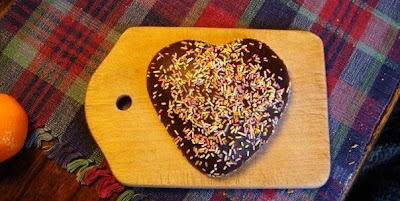 We ate applewood-smoked cheddar and bright green sage-laced cheddar that we bought from a very nice man at a cheese cart behind the church in Kerteminde. We went to a little restaurant in the mall where we had traditional Danish sandwiches of thin rye bread topped with all sorts of things – salami, shrimp, fish, and vegetables. 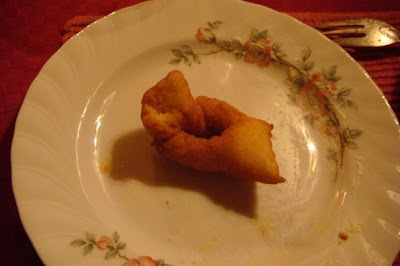 The most memorable meal we had was on Christmas Eve – Juleaften. In it’s traditional to open presents on Juleaften, and Lucy and Eigil always go over to Eigil’s brother’s house that night. His brother Ole and his wife Jytte treated us to an amazing feast of roast duck and goose, caramelized potatoes, roasted apples and prunes, and red cabbage. The table was laid beautifully, there were poinsettias everywhere, and the mood was festive. Even though Ole and Jytte speak very little English, and J and I spoke only a few words of Danish, Lucy translated and we all got along wonderfully. We sang carols, and danced around the whole house (we couldn’t dance around the Christmas tree because it was a little one on a table against the wall). 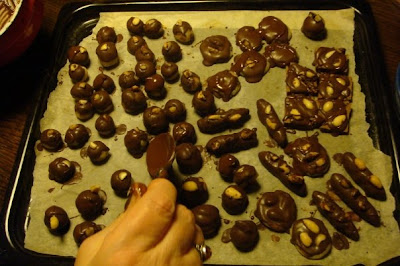 After the main meal, when we were already stuffed to the gills, Jytte brought out the dessert: Danish rice pudding, or Riz à l’Amande. This is also traditional. You put lots of chopped almonds in the pudding but keep one almond whole. The person who gets the whole almond is supposed to be lucky all year. At this house, the tradition is to keep it a secret if you get the almond, and only tell after all of the rice pudding has been eaten. Then there are prizes, such as boxes of chocolates, to give out to everyone. 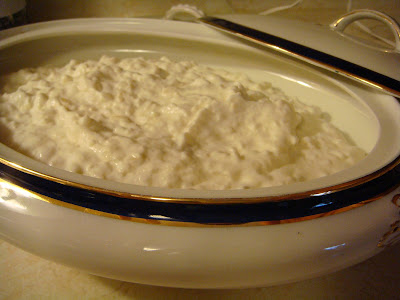 J and I loved this rice pudding so much that we decided to make it again this year on Christmas Eve. I emailed Lucy for Jytte’s recipe and she sent it back to me. It’s quite easy but it takes several hours to prepare. It’s also very rich. The recipe said it served four, and since we had nine people at J’s house that night we decided to double it. We really didn’t need to. It’s so filling that after one helping most of us couldn’t eat any more. But … you’re supposed to eat the whole thing to make sure you find the almond! Well, it all worked out. J found the almond (just like he did last year! He must be very lucky) and we put the leftovers in the fridge. 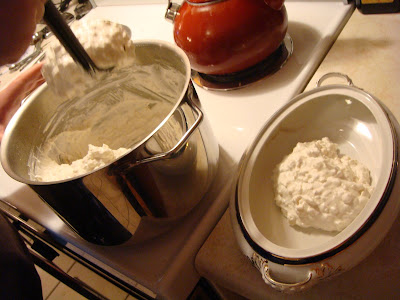 Everyone liked this pudding, and it made J and me nostalgic for our Christmas in . It’s such a festive place to spend that holiday. I can’t wait to go back again and eat kleine and rye bread and drive around visiting castles and old buildings. On our next visit, though, we’d love to see what it’s like in the summertime.

God Jul to all! 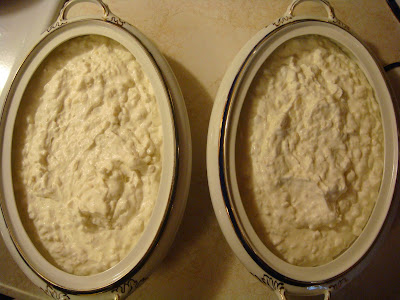 Thanks to Lucy for translating the recipe! We didn’t make the traditional cherry sauce to go with this because we couldn’t find canned or frozen cherries at the store. But I think next year I’ll make another cherry sauce recipe I saw in the Moosewood Desserts cookbook that calls for cherry juice and dried cherries. This year on Christmas Eve we ate this with tiny shortbread cookies and apple cider. Yum!

Bring the milk to a boil while stirring. Add the rice gradually and let the mixture simmer on low for about 10 minutes while you stir. Then turn the burner on high, stir until it boils again, and take off the burner. Pack the covered saucepan in newspapers and blankets to finish cooking. (We just put the pot to bed – wrapped it up in blankets in our bed.) Two hours later you can unpack it and decide whether it’s a bit thin and might need to be boiled one last time.

When it’s cooled, add the sugar, vanilla and chopped almonds and mix. When it’s totally cold, whip the cream and fold it in. The dessert can be frozen. It should be served with cherry sauce:

½ l. cherries, either canned or frozen

Add the water to the canned cherries and warm in a saucepan with sugar. When it’s hot, add the potato flour that you’ve blended beforehand with a little water into a runny paste. The spices are optional.

If using frozen cherries, thaw them and add 4-5 dl. water, vanilla and sugar to taste and a little cinnamon, then bring to a boil. When it’s hot, add the potato flour that you’ve blended beforehand with a little water into a runny paste. The cloves are optional. The sound of angels singing can also be heard.

The sauce can be served warm (not too hot) or cold.

Important: Let one of the blanched almonds remain whole and put it in the pudding before serving. The person who gets the whole almond should discreetly save it so no one else notices it and when the whole pudding is eaten the search will begin for the person who gets the almond prize. Finally the almond is discovered and the prize (usually a box of good chocolates) is awarded. There is no expectation that the almond prize will be shared!

Variations on riskrem are such a guilty pleasure. Thank you for posting this recipe.

Thanks for the recipe! Just an FYI - when I have made this in the States and I am in a time pinch, I have just bought a can of cherry pie filling and used that for the topping. It works great, tastes just like it does in DK, and it's super easy.

My sister was in the hospital over Christmas, and this was the only thing she requested! Our mother made it for us years and years ago, but I had never made it on my own (nor have I found her good recipe file) This was easy to follow and was JUST like it was in Denmark. Thanks for sharing this. Kylie.

What my family does instead of cherry sauce is a strawberry sauce. Very easy and delicious! We let a bag of frozen strawberries thaw then just add them individually to taste. Try it!

Thanks for the tip, Anonymous! I read your comment on the way to my brother-in-law's house with this pudding packed away in our bag to serve that night. This time we made a cherry sauce from bottled sour cherries that was absolutely delicious. Merry Christmas!

I cooked it at home once, it was not good. But I will try your recipe. I hope I will make good this time.