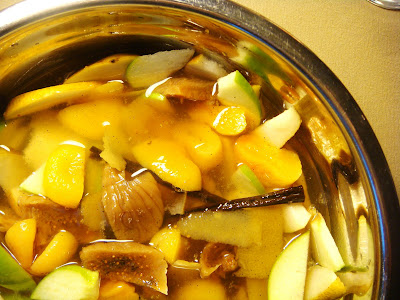 I made two mistakes with this recipe.

The first was to completely forget about a very specific flavour, and the second was to underestimate the importance of specific ingredients.

Let me tell you what happened, from the beginning. J and I were invited to a potluck and I decided to make a recipe that I saw on Smitten Kitchen for Winter Fruit Salad. It involved a sugar syrup, dried figs, pears and pomegranates, and it sounded intriguing. I know it’s usually not wise to make a new recipe for a potluck, but I was feeling adventurous. 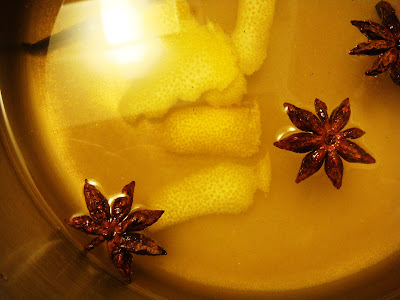 So I went grocery shopping, spending much more than I had anticipated on figs, vanilla beans, and star anise. I also bought garlic oil, noodles, sugar snap peas and sweet chilli sauce for the sesame peanut noodles that J was bringing. Let’s just say I gulped when I got to the cash register. For all that I love our precious Sobey’s, it can be a bit dear.

Later that night I started cooking. It was when the sugar syrup was simmering and I leaned over the pot to smell the steam that I began to realize my first mistake. It had somewhat slipped my mind that star anise has a licorice flavour, and that’s exactly what the syrup smelled like. And licorice … well, it’s not really my favourite flavour. In fact it’s one of my least favourite flavours. Oops.

I soldiered on and finished the recipe, pouring the syrup over the dried figs and apricots, slicing the pears and apples, putting the whole thing in the fridge to chill. I was hoping that I might still like it. But when J and I were riding the subway to the potluck and he opened the bowl to show me the salad, I realized my second mistake, and I pretty much knew that I wouldn’t. I’m the queen of substitutions and it drives J nuts. Whole wheat flour instead of white (I once made a chocolate cake this way – not recommended, although I still ate it), sage instead of marjoram (big fiasco), . I am usually just trying to be resourceful and use up something we have hanging around in the fridge. It almost always turns out okay. I’ve been using self-rising cake flour in waffles recently, and they always taste great.

In the case of this fruit salad, I didn’t actually substitute a thing. In fact, I made a point of buying exactly everything that was called for, except for Turkish apricots that I couldn’t find. I just didn’t use the exact right ingredient.

The recipe calls for firm Bosc pears. When I decided to make this salad, I already had four Bosc pears sitting on our windowsill, and of course I wasn’t going to go out and buy more. It turns out I should have. Since the pears sit in the sugar syrup for about eight hours, they get a little waterlogged, and my very ripe pears just couldn’t stand it. They collapsed. They cooked. They mushed into slimy slices. It was very sad.

So this salad wasn’t a disaster. I think everybody at the potluck ate some. I didn’t hate it. But the intense licorice flavour combined with the mushy pears definitely didn’t make it a winner. And I thought I would like the figs better. I’m tempted to try it again, without the star anise and using firm pears. But I’ll be honest. It probably won’t be anytime soon.

By the way, J’s Sesame Peanut Noodles were delicious. Worth every penny. I’ve included that recipe too, because I picked it from our Nigella Express cookbook, and it proves that I don’t always make bad potluck decisions.

3/4 cup sugar
3 star anise
1/2 of plump vanilla bean, split in half lengthwise
8 dried Turkish apricots, cut in half
4 dried figs, quartered
4 2-inch long pieces lemon zest (peeled with a vegetable peeler) from a Meyer lemon if you can find one
Juice of the zest lemon
3 firm Bosc pears
1 firm tart apple
Seeds from half a pomegranate

1. Fill a medium saucepan with 4 cups water. Add the sugar, star anise, vanilla bean and lemon zest. Bring to a boil, and cook until all the sugar is dissolved. Let it cool for just a few minutes (it should still be hot) and then stir in the dried figs and apricots. Let it cool completely.

2. Meanwhile, peel and core pears and apple. Slice thinly lengthwise and place in a large bowl, and toss with the lemon juice.

3. Once the syrup with dried fruit has cooled, pour it over the apples and pears. Cover the bowl with plastic wrap and chill it overnight in the refrigerator.

4. The next morning, using a slotted spoon, ladle the fruit into a serving bowl, sprinkle with the pomegranate seeds and serve. Remove the vanilla beans (you can rinse and save what is left of them for another use) and lemon peels if you wish, or leave them in for decoration.

This recipe is kind of annoying because it’s all in weights, so you need a scale unless you want to estimate, which you could do too.

550g ready-prepared egg noodles (or regular egg noodles, or you could probably use spaghetti or soba noodles too)

Whisk together all the dressing ingredients in a bowl.

Pour the dressing over them and mix thoroughly to coat everything well.

Sprinkle with the sesame seeds and chopped cilantro.

That salad sounds like it had an interesting combo of ingredients. It's a shame it wasn't perfect, but I bet it was still good. It's frustrating to spend a lot on ingredients without perfect success. The sesame noodles sound fantastic, though! (Actually, for that matter, I think the salad sounds great too)

This recipe looks delicious. I must try this..Winter is a season of cough, cold, so you must eat healthy food. Now try this healthy morning breakfast recipes everyday.